Welcome back to “Monday’s Life Change”. Today, I’ll be wrapping up this series, but I hope to bring it back again at a later time when I’ve been able to compile some more of your amazing stories of life-change. Thank you for reading them and encouraging those who share.

I’m bringing you another story today about adoption as we end this series. It’s obvious as you look through scripture how much God’s heart beats for adoption as He commands that we as the “church” care for orphans. This is Beth and Tim Gould’s story:

When Beth and Tim Gould got married, they made a plan for their life that sounded something like this: wait a few years and have 1 or 2 biological children, then adopt. Ready, set, go!

God had other plans…and it has involved: waiting, trusting, and giving up control. This doesn’t come naturally to anyone.

Months of trying to have a baby went by. The disappointment and frustration that accompany this struggle caused Beth and Tim to ask their doctor for help. They were told that Invetro Fertilization (IVF) would be their only option if they wanted to have biological children. However, they just didn’t feel that was the route God had for them.

Over time, Beth began to feel strongly that they were to adopt a child. When she shared what had been on her heart with Tim his only question was “where do we start?”

They felt God leading them in the direction of “fostering to adopt” and they quickly became foster parents. In this program, children from very difficult situations would be placed in their home for foster care. At that point, the Goulds could file for adoption of that child.

Beth knew that fostering could be potentially heart wrenching. How do you say good-bye to a child that you’ve loved as your very own? She couldn’t imagine it.

Their first little girl was brought to their home at just 4 weeks old. Tiny and wrinkled and completely dependent on them, Beth and Tim loved her and cared for her as their own. But just 6 months later, after countless kisses and long walks together, she was placed into the hands of her biological grandmother.

Their second little girl came to them at just 3 days old. Barely awake enough to see who was holding her, she was placed into their arms. Eventually she began to crawl and sit up. In time, she began to call Tim “Papa”. But when she was 12 months old, her grandmother took custody of her.

The Goulds were heartbroken.

The story was similar with their third and fourth little girls. Each time loving them, watching their little personalities grow and optimistic that surely “this time” she would be their daughter.

Each time, as the case worker came to collect the child, it ended the same: a little girl that they loved as their own, read stories to, and cared for was carried out the door.

They fell apart every time “she” left. And each time they found themselves asking some questions of the Lord: “Are we hearing you clearly? Is this really what we are supposed to be doing? If we are being obedient, why is this so painful?”

And they are right. This is where most people would throw in the towel and walk away. Surely God wouldn’t want us to hurt so badly…right?

Each time they asked, they sensed God saying, “Trust me. You are taking care of my children for a while, just trust me.”

Beth says, “We spent each day with them as if it might be our last with them. During this time I was frequently asked, ‘How can you do this? How are you not losing your mind?’ My answer was ‘God has a plan for a family for us.’ Some days I was proclaiming it because I believed it and some days I just had to keep repeating it until I was believing it again.”

In August of 2011, some friends of the Goulds, who were also fostering, suggested that they care for a little boy who had two siblings already in their home. He had been born at only 29 weeks and was still 3 weeks shy of his original due date. At this point, Beth and Tim were heart-broken and afraid to take another child into their home, but as they prayed about it, they felt God confirming that he should come home with them.

Little Isaiah came to live with the Goulds on medications and an apnea monitor (an alarm that goes off when a child stops breathing). Beth felt terrified. She is a Pediatric ICU nurse, but says “I seemed to forget all of my training when my own child stopped breathing on me at home!”

When Isaiah was 9 months old, they received a call that rocked their world. Isaiah’s two siblings, who were being fostered by their friends, needed an adoptive home. When Beth and Tim were asked if they would consider taking Isaiah’ siblings to be their own, they answered with a resounding YES!!!! Their only questions revolved around how they would physically care for all the needs these children would have.

The week before Isaiah’s first birthday, Lilyana and Daniel, his siblings, came to live with them. They finally felt like they were seeing pieces of the “puzzle” of God’s plan for their life fit together. “He needed us to take care of a few of His children, until He had all of our family together.”

The first few months were a whirlwind of trying to figure each other out. The Goulds suddenly had 3 children under the age of 4 in their home and the obvious behavioral issues that accompany.

One Sunday, Beth recalls dragging the kids out of church as they all sat on the floor of their van and cried. She’s dealing with all sorts of feelings as a mother to young children, like inadequacy, fear of the future, and a desire to be all that they need since they have already been through so much.

All of the children are in some sort of therapy, so each day can be a struggle, but they are loving children with lively and fun personalities.

God is stretching and growing Beth and Tim through their children. As they depend on the Lord, they find moments of deep joy and peace amidst their busy life. So, they get up each day and do it all over again. 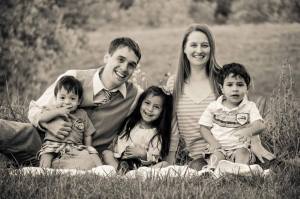 My name is Shanna Lehr. I'm blessed to be the wife of Scott Lehr and mother to Ella, Ava, Janie and Gracie Belle. I love to cook, travel, run, and spend time with my family. My life has been changed by Jesus and I love to share him with others. Stop back often and join the conversation by leaving a comment. I love to hear from you! You can connect with me on Twitter: @ShannaLehr
View all posts by shannalehr →
This entry was posted in Uncategorized and tagged adoption, Bible, children, flourish, foster care, Jesus, life change, women. Bookmark the permalink.

3 Responses to Monday’s Life Change: Putting the pieces together